Megastar Chiranjeevi has craved a niche for himself over the years, with his movies and has a cult fan following that only few stars can dream about. He is considered as an ALL-TIME GREAT in Telugu and Indian Cinema and he deserves those accolades for all the work he has done and milestones achieved over the years. Without any background, Megastar Chiranjeevi came into Industry and became a legend as he has fans for his dance moves, fights, charm, acting skills and comedy timing. Hence, fans call him as their BOSS and MASS ka BOSS, too.

Both have been composed by Devi Sri Prasad and even though few lyrics have been trolled, overall song and beat seems to be another enjoyable mass number from DSP, on the lines of “Aakalesthe Annam pedatha”, “Ammadu Let’s Do Kummudu”, “Shankardada MBBS”, “Diyyalo Diyyalo”, “Ringa Ringa”, “Dinka Chika”, “Ratthalu Ratthalu” and more recently viral hit “O Antava Mama … OO Antava Mama”. While some fans of DSP expect even better tunes from him, this song seems to be in sync with the mass beats that the director and film unit wanted from him.

Megastar Chiranjeevi and Urvashi Rautela will shake their legs for the song. Mass Maharaja Ravi Teja is acting in a special role in the film. Shruthi Haasan is playing the leading lady and movie is expected to hit the screen on 12th January for Sankranthi season. Release date of the film will confirmed by producers Mythri Movie Makers soon. Entire shoot of the film will be wrapped in December, say sources and the team has started promotions with this first single. 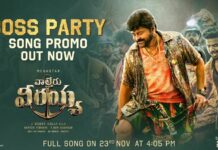