Aparna Balamurali started her career in Malayalam and then she branched into Tamil. With Suriya Soorarai Pottru, she has earned National fame for her performance and Suriya won a National Award. Aparna Balamurali in Malayalam got huge break with Maheshinte Prathikaaram and now, she has more than 6 films to release in 2023. She had a Tamil release, Nithanam Oru Vaanam, last year and she did not announce any movies. Aparna Balamurali attended a Law college fest as part of her upcoming film, Thankam promotions with Vineeth Sreenivasan.

At the event, a student ran up to the stage, where everyone are seated and asked Aparna Balamurali for a selfie. She accepted his request and stood up. Suddenly, he tried to put his shoulder around her and the actress softly moved away from there. Vineeth Sreenivasan is stunned looking at this act and Aparna Balamurali shares her disgust about the act.

This kind of misbehavior triggered many women and fans on social media. Everyone extended their support to Aparna Balamurali and shared their opinions on misguided masculinity. Well, actors might be public figures but they deserve as much as respect as we ask from others. Hope, people can understand this.

Tamannaah Bhatia is cast opposite Rajnikanth in Jailer! 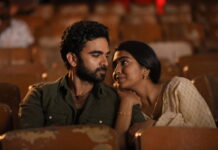