Mrunal Thakur has become a household name with her performance in Sita Ramam, film. She made a huge impression with her Sita role on viewers and the movie, Sita Ramam became a romantic classical blockbuster. Mrunal Thakur started her career in TV with Pavitra Rishta and then turned into a Bollywood Belle with roles in films like Super30. She has achieved Pan-India success pairing opposite Dulquer Salmaan with the recent film. Mrunal Thakur is shining bright with success and that is appearing in her dress too.

In her recent photoshoot, Mrunal Thakur looked blemishing in blush pink ghagra set and we could not take our eyes off her. The young actress has promised huge potential and if she can live up to Sita character, in her next films, she can be one of the most revered actresses from Indian Cinema, in recent times. Mrunal Thakur traditional lehenga look has been liked by her fans on social media and she is brimming with glow.The kurta had a plunging neckline and featured intricate embroidery and heavy work with sequins while the beautiful ghagra had similar detailing.Mrunal carried a gorgeous pink sheer dupatta with her outfit.zfor accessories,Mrunal wore a statement choker necklace and earrings and opted for glamorous dewy makeup.

We can say that the actress is becoming a star and the glow is visible. We wish many more great films and performances for Mrunal Thakur. Meanwhile, let’s just admire her in these new photos.

Are you going through Anxiety disorder? Don’t ignore symptoms 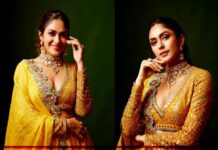 Mrunal Thakur shines like a star in Golden Lehenga!

Nani30 to be a father – daughter relationship story!

Chup: Revenge of the Artist clocks 30 MN Viewing Minutes in 24hours on ZEE5!