Dwayne “The Rock” Johnson came up with DC’s Black Adam, this weekend and he promised that the power balance would shift. Post this film, DC will also be in contention to make better Super-hero films just like Marvel Cinematic Universe. Dwayne Johnson waited for 15 years to be able to play Black Adam and finally, released the film. DC promised to give more entertaining movies after they faced huge amount of backlash for their failures. Dwayne Johnson played a huge part in deciding the cast, designing the story and stunts for the film as well. Let’s discuss about the film, Black Adam now.

Black Adam (Dwayne Johnson) is awoken by Adrianna Tomaz (Sarah Shahi) at the mystic city, Khandaq. The city is 5000 years old and a legend says that they have a super-hero protector like Shazam and archeologist group that assist Adrianna believe it to be Black Adam. Intergang, a group unholy crooks, continues to harass people of Khandaq. On the other hand, finding out Black Adam has been awaken, Amanda Waller, activates Justice Society of America to fight this new threat. Hawkman, Doctor Fate (Pierce Brosnan), Cyclone and Atom Smasher, the members of JSA fight with Black Adam. Intergang try to perform the rituas to awoke most powerful evil lord, Sabbac and JSA understand that Sabbac is the major threat who needs to be wipped out and not Black Adam. What happens next? Why Superman and Black Adam come face to face or will they? Watch the movie to know more…

Black Adam tries to be a fun action comedy film with Dwayne “The Rock” Johnson’s charisma as the center of attraction. Jumanji franchise reboot used him perfectly in the first film but then the second film. Jumanji: The Next Level did not work as well as Jumanji: Welcome to the Jungle. Even Jungle Cruise suffered highly because of over dependence on Dwayne Johnson’s image towering over the flaws in the script. Action sequences featuring him have also become too superficial with heavy reliance on VFX, in every movie of his. Now, in a VFX spectacle, he took it to next level and it gets a bit too much to follow the narrative with action sequence after sequence being thrown at you with little time to soak all the details being shown and “told” by exposition on the screen. Movie feels like a giant parade of VFX generated images trying to say something but without any clarity.

Pierce Brosnan kind of a charming action star, who once rocked the world as James Bond, gets sidelined after a point as the action sequences need Dwayne Johnson to be more in them than the other characters or actors. Hence, the random characters and the scenes involving come on the screen as if we are watching a feature stitiched together in a hurried manner when they needed more time and efficient script writing to make it all simple and easy to follow. Except for Larne Balfe’s score and one complete action episode, Black Adam doesn’t correct previous mistakes of DC, rather makes new mistakes along with the past ones. If you like Dwayne Johnson, you may give it a try with lowest possible expectations. 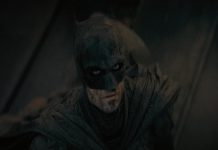 The Batman’s terrifying new trailer with release date is here