India and Sri Lanka started their 3 ODI series on a high. KL Rahul, Virat Kohli and Rohit Sharma have joined the team after a gap. Mohammad Shami and Shreyas Iyer have also joined the team along with Yuzvendra Chahal, Axar Patel. Umran Malik, Mohammad Siraj and Shubman Gill. Dasun Shanaka has been appointed as captain for ODI series too. Sri Lanka won the toss against India and decided to field first. Rohit Sharma and Shubman Gill opened innings for India and scored 143 runs in partnership.

In 19.4 overs, India scored 143 runs and looked all set to cross 400. Rohit Sharma continued to play freely after Shubman Gill (70) got out too. But soon Rohit Sharma (83) got out as well. Virat Kohli continued to take the good work done by openers forward along with Shreyas Iyer (28), KL Rahul (39). By the time, KL Rahul got out India scored 303/4 in 40.5 overs. Even though Hardik Pandya (14) and Axar Patel (9) failed, Virat Kohli has put the step on the gas and hit his 73rd International century for India.

Virat Kohli equaled Sachin Tendulkar’s record of 20 centuries on Indian grounds at Home, in ODIs. He is currently on 45 centuries and Sachin hit 49 ODI centuries in his career. India went on to put up 373/7 runs on board in 50 overs and Virat Kohli scored 113 runs off 87 balls. Kasun Rajitha took 3 wickets by giving away 88 runs in 10 overs among Sri Lanka bowlers.

Sri Lanka batsmen did not get any chance to go all out against India pacers. Mohammad Siraj quickly removed Avishka Fernando and Kusal Mendis. Pathum Nissanka showed his class at the other end but the task has become unachievable for Sri Lanka against India, with these two big initial blows. Charith Asalanka (23) with Nissanka tried to steer the innings and give a momentum but failed. Dhananjaya de Silva (47) and Pathum Nissanka (72) showed great character and gave India bowlers run for money in their 72-run partnership.

Once again Sri Lanka captain Dasun Shanaka had to play the saviour role to not let Sri Lanka lose by huge margin after both Nissanka and Silva got dismissed. He started forming strike with Chamika Karunaratne (14) and Kasun Rajitha (9) at the other end. India bowlers did not find enough support from fielders as well as several catches have gotten dropped. Dasun Shanaka went on to score his second century 108 runs from 88 balls. Sri Lanka scored 306/8 in 50 overs and lost by 67 runs.

Umran Malik got 3/57, Mohammed Siraj got 2/30, Mohammed Shami got 1/67, Hardik Pandya got 1/33, Yuzvendra Chahal got 1/58 took wickets for India. Virat Kohli, Rohit Sharma and Shubman Gill, the TOP 3 batsmen for India today have scored runs and it became easy for inexperienced bowlers to force an Indian win. 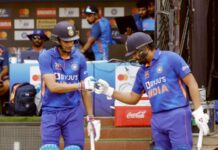 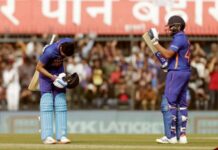