India is touring in New Zealand after ICC T20 World Cup for 3 T20Is and 3 ODIs. After the T20Is, New Zealand and India started the ODI series at Auckland on 25th November, 2022. Kane Williamson won the toss for New Zealand and decided to field first. India with Shikhar Dhawan as captain started the innings with him and Shubman Gill, in a circumspective manner.

Openers Shubman Gill and Shikhar Dhawan played risk-free cricket to put on 100 run partnership. They both scored fifties and Shubman Gill seemed slow to start off blocks. He scored 50 off 65 and got out at 124 in 23.1 overs. At the same score Shikhar Dhawan got out after scoring 72 runs off 77 balls. New Zealand bowlers Tim Southee and Lockie Ferguson managed to send both the openers back on same score in the matter of 8 balls. Shreyas Iyer continued to score freely while Rishab Pant struggled a bit.

Rishabh Pant (15), Suryakumar Yadav (4) failed in the pursuit of quick runs. Sanju Samson steadied the ship with Shreyas Iyer. They both have put on 94 runs partnership and Shreyas Iyer scored his fifty. Sanju Samson fell after scoring 38 runs. Washington Sundar played a blistering cameo to take 254/5 from 45.4 overs to 300 in 49 overs. Shreyas Iyer got out in last over after scoring 80 runs off 76 balls. Washington Sundar scored 37 (16) and India scored 306/7 in 50 overs. Among New Zealand bowlers – Tim Southee (3/73), Lockie Ferguson (3/59), Adam Milne (1/67) got wickets.

New Zealand started the chase with Finn Allen (22) taking on Arshdeep Singh. Shardul Thakur sent him back. Devon Conway (24) fell to Umran Mallik and Daryl Mitchell (11) also fell for him. New Zealand scored 88/3 in 19.5 overs. Captain Kane Williamson and Tom Latham came together at this moment. They did not let another wicket fall and kept scoring slowly. New Zealand reached 200/3 in 37 overs. Tom Latham unleashed his hitting prowess and completed his 100. He went on to score 145 (104) and Kane Williamson missed his century as he ended up on 94 (98). Both of them have put on 221 runs for 4th wicket to give 7 wicket win to New Zealand.

Tom Latham from New Zealand won Player of the Match, and he said: “Just one of those days when everything comes off. Having a bit of fun in the end… It was nice to put the ball in the gaps and run hard. I guess the preparation has been nice… Washington Sundar was getting a bit of turn. Small ground, so you can capitalise in the end. Nice partnership with Kane, who played beautifully.”

Kane Williamson, New Zealand Captain: “It was a competitive total. If you build partnerships here at Eden Park, you can chase anything. Incredible innings from Tom Latham. On these drop-in pitches, you bowl full and straight, and it can be difficult. It was one of the most special ODI knocks I have seen. You are always in the game with the dimensions. Spin played a big role today. The seamers did an excellent job. There were moments when we put them under pressure. Nice to make a contribution, and with Tommy going the way he was, it was about complementing.”

Shikhar Dhawan, India Captain: “We felt good with the total. The ball was seaming in the first 15 overs. This ground is a bit different than other grounds. We bowled a lot on a short of a length, and Latham attacked. We misfielded on a few balls. But as I said, we were quite short to Latham, and that’s where he took the game away. He hit four boundaries in the 40th over, and that’s where the game shifted. Surely lots of learning for the boys.”

The young bowling of India ODI team seemed clueless when Tom Latham started his onslaught after 37 overs. New Zealand preferred to keep their wickets intact and go hard at the end of the chase. If India prefers same bowling options, then the batsmen should score 350 or 360 above each game with small New Zealand grounds. For now, New Zealand leads with 1-0 in this ODI series. 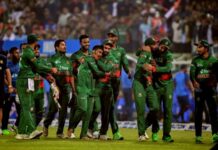 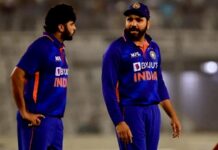