India are playing their first ODI against New Zealand after whitewashing Sri Lanka, at Hyderabad. Opening batsman Shubman Gill has scored a massive century. Rohit Sharma, India captain won the toss and elected to bat first. Both the openers mixed aggression with caution and they have put on 60 runs in 12 overs. Rohit Sharma scored 34 runs from 38 balls and after he got out, Shubman Gill took the mantle to steer the innings. He is in great form as he scored a big century against Sri Lanka in the last ODI and he seemed comfortable against New Zealand bowling. Shubman Gill did not struggle against tight line and length bowling.

Virat Kohli (8) and Ishan Kishan (5) failed to get even a start. Suryakumar Yadav scored 31 runs off 26 balls before he got out and put on 65 runs partnership with Shubman Gill. Hardik Pandya is playing alongside Shubman Gill and the pair has put on 50 runs partnership, by the time, this article has been updated. India is on 220/4 from 35.2 overs.

Shubman Gill is on 119 from 99 balls, batting. He showed his range of stroke-play under scorching heat and played shots all around the park in style. He did not seem to be tired or exhausted with this innings. He almost emulated Sachin Tendulkar in playing straight drives. The young batsman has crossed 1000 runs in 19 innings from 19 matches, a record fastest for India. Fakhar Zaman scored 1000 runs in 18 innings and Imam-ul-Haq in 19 innings who are placed above Shubman Gill. A very well done Gill and hope he continues to make many more runs for India, living up to his start and potential.

Madhi Vihangame Song from Popcorn is out now! 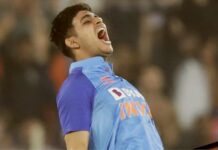