Indian Wrestlers like Bajrang Punia, Sakshee Malikh, Vinesh Phogat, Sangeetha Phogat have sat in protest against Wrestling Federation of India, WFI, President Brij Bhushan. They are alleging Brij Bhushan of sexual harrasment and misbehaviour with women. Bajrang Punia stated that he has proofs against WFI President and they will not stop protesting until they get justice from Government. Brinda Karat tried to extend her support to protestors by going to the dias but wrestlers pleaded her to not make it into a political fight. Bajrang Punia made it clear that they want Government to sack WFI President Brij Bhushan, immediately and ensure justice.

Vinesh Phogat has alleged that she has six women wrestlers ready to state the truth against Brij Bhushan. She alleged he used to keep his Hotel room door open, causing unrest to Women. WFI has been silent on the issue and Indian wrestlers have been continuing their protest in Delhi. Wrestlers have further stated that they have evidence to prove all the atrocities committed by WFI President at court and in front of any committee.

Former Haryana Chief Minister, Bhupinder Singh Hood has extended his support to the protesting wrestlers and stated that no one post such allegations against anyone without any truth to it. Now, Indian Sports Minister, Anurag Thakur has sent notices to WFI to give a written explanation about the events. “Taking cognisance of allegations by wrestlers, Sports Ministry sent a notice to WFI & sought a reply within 72 hrs. The upcoming camp has also been postponed with immediate effect. I am going to Delhi and will meet the wrestlers”, stated Union Sports Minister Anurag Thakur, in Chandigarh. In response to these allegations, WFI President, Brij Bhushan could resign to his post on 22nd January, say reports. 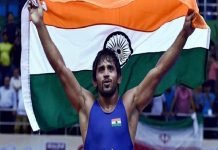