ICC T20 World Cup has seen first upset on 16th October with Namibia winning over Sri Lanka. Now, the second day of the tournament registered another upset with Scotland winning against two-time champion West Indies. ICC T20 World Cup has already been in news with its new format of qualifiers and Super 12 group division. But in the qualifiers, Associate Nations are showing that they are not bench or table-warmers in this edition of ICC T20 World Cup.

Scotland have been asked to bat first by West Indies after they have won the toss. Openers George Munsey and Michael Jones (20) made use of the fielding restrictions and put on 55 runs in 7 overs. Calum MacLeod (23) and Chris Greaves (16) helped George Munsey to score an unbeaten 66 runs off 53 balls and set a score of 160/5 in their 20 overs. ICC T20  World Cup two-time winners West Indies had Jason Holder (2/14) and Alzarri Joseph (2/28) bowling well. Scotland looked determined to make a huge impression in ICC T20  World Cup after posting such a decent score.

Kyle Mayers (20) and Evin Lewis (14) went after the Scotland bowlers but got out within first 6 overs. Brandon King (17) also fell soon in 8th over with score at 58. Spinners and medium pacers of Scotland did not let West Indies middle-order to score freely and from 58/3 they were reduced to 79/7 in 13 overs. Jason Holder (38) managed to restrict Scotland bowlers aggression but rest of them fell for bad shots. West Indies got bundled out for 118 in 18.3 overs after securing a start like 58/3 in 7.4 overs. Mark Watt (3/12) and Michael Leask (2/15) bowled tight lines and played major role in restricting West Indies. George Munsey got Player of the Match award for his 66 not out, splendid innings.

Well, ICC T20 World Cup seems to have lot in store with such a sensational start to it. Two associate nations announcing their presence by winning against previous champions like Sri Lanka and West Indies prove that the tournament is not going to be all about big teams clash against each other and they have arrived on big stage, too.

Mohammad Shami last over had 4 wickets in 4 balls against Australia. Read about it here. 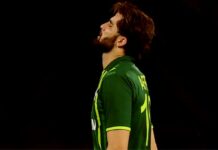 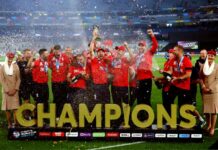