ICC T20 World Cup had Group 1 match finally after they have been mostly washed out by rain. Australia after not being able to play in Melbourne, moved to Brisbane and fought with Ireland. Both teams needed to win this match to be able to progress forward as this is their 4th match. Ireland won the toss and elected to field. Australia openers David Warner and Aaron Finch came out to make a huge impact in the first six overs.

Ireland had an uphill task to win against in-form Australia bowlers. Paul Stirling (11) and Andy Balbirnie (6) got out soon. Lorcan Tucker kept one end safe for Ireland by batting at his own pace even though wickets kept falling, at the other end. George Dockrell (0), Curtis Campher (0), Harry Tector (6) kind of big hitters failed for them. Gareth Delany (14) and Mark Adair (11) supported Tucker for brief time. Adam Zampa (2/19), Mitchell Starc (2/43), Glenn Maxwell (2/14), Pat Cummins (2/28) did not allow Ireland to recover at any moment. Lorcan Tucker ended up scoring 71 not out from 48 balls in 137 runs of Ireland total. Australia won the match by 42 runs with 11 balls remaining.

This match has almost made it difficult for England to join New Zealand/ Australia in the final two spots. New Zealand has their next matches against Ireland and England. They will definitely end up with 7 points. Australia has their last group match against Afghanistan. England have to face unpredictable Sri Lanka and consistent New Zealand which will be not so easy for them. Looks like with this performance, Australia has made things more clear for them to enter Semi-Finals from Group 1. 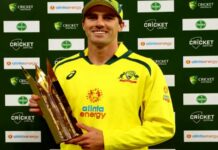