Harmanpreet Kaur has taken India to first ODI series victory against England in England. She scored 143 runs off 111 balls. Indian Women posted 333/5 in 50 overs and restricted England Women to 245 in 44.2 overs. Indian Women won the match by 88 runs.

England Women captain Amy Jones won the toss and elected to field first. Shefali Varma’s horrid time continued with a single digit score. Smriti Mandhana continued her form in the series and Yastika Bhatia also supported her well. When they both looked set for big scores they got out.

Kaur took the attack to English bowlers in last 10 overs post the dismissal of Deol and Indian team managed to score 121 runs in death overs. England Women started their chase by loosing Tammy Beaumont early for brilliance in field by Kaur.

Renuka Singh sent back Emma Lamb, Sophia Dunkley for low scores. Middle order batters of England had to rebuild and look to chase the target. Danni Wyatt and Alice Capsey did the rebuilding part with quick fire 55 runs partnership but Capsey got out at the wrong time. Danni Wyatt looked to give some momentum with Amy Jones but she fell after scoring 65 runs off 58 balls when the score is on 167 and the writing has been on the wall.

Charlie Dean (37) and Amy Jones (39) tried to rescue innings as much as they can but both fell for good balls to Hemalatha. Eventually, they got all-out for 245 in 44.2 overs and Indian Women completed a famous series victory. The third ODI will be played at Lord’s on 24th September. Indian Women will be looking wrap up a clean sweep. 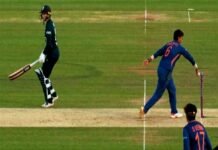 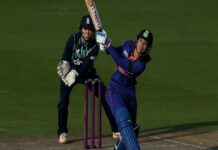 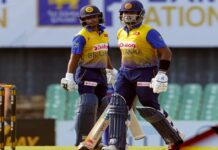