A video surfaced on Internet showcasing Telangana BJP President Bandi Sanjay son Bhageraatha, assaulting another student at Mahindra University. The assault has been recorded on a video and Bhageeraatha was found abusing the student before hitting him. Dundigal Police have registered a case against Bandi Sanjay son, Bhageeratha after Mahindra University disciplinary action committee has given complaint. BJP leaders from the state have commented that Bandi Sanjay has been aggressively commenting and targetting BRS government in Telangana and hence, this is government trying to take revenge.

BRS leaders have pounced on the opportunity to share the video and several party workers have also been active on social media sharing the video, incident. Bandi Sanjay and his family did not react on the video. On the other hand, a new video has been released showcasing the student who got slapped by Bhagareetha claiming that he has no issues, regarding the incident and he took a beating because he misbehaved with a girl. He stated that they have sorted the incident few months, ago. BJP leaders have extended their support to Bandi Sanjay in this incident.

Bandi Sanjay’s son is very Violent !
This is Unlawful pic.twitter.com/Nv9Bcn3X6H

On the other hand, Bandi Sanjay is said to be silent to only comment after knowing full details about the incident. BRS leaders have been aggressively saying that the BJP state president is using his power and influence to subdue to the issue and they won’t let it happen. We have to wait and see, how will this incident takes turns in coming days. 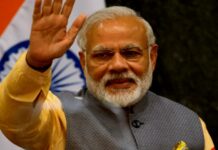 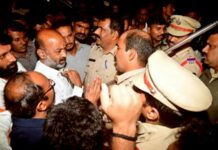 Bandi Sanjay gets arrested and MLC Kavitha warns him! 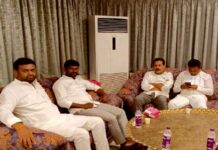 Telangana MLA Bribery Case has been handed over to CBI