Indian Prime Minister, PM, Narendra Modi visited Morbi Bridge collapse site near Machchhu River on 1st November. As he visited, the local officials continued the search operations for the remaining bodies in the river. Morbi Bridge over Machchhu River collapsed as the suspension wires couldn’t handle the weight of the people on the bridge. The video of the accident has been horrifying to say the least and opposition parties have been calling this a huge corruption by Gujarat Government. PM Narendra Modi visited the spot and looked at the rescue operations.

Later, PM Narendra Modi went to SP office and met the first responders. He talked to them at length about the rescue operations and heard about how they have witnessed the accident. PM Narendra Modi has also met 26 victims at the hospital and asked them to think about recovery. Gujarat Government has distributed Rs.5.40 crores as compensation for the families of victims and the death toll has raised to 160 till now.

PM Narendra Modi speaking to the press stated that he advised for an extensive inquiry into the incident and asked for a detailed report. He asked Gujarat Government to implement the technical suggestions in repairing the 140 year old bridge as soon as they can. The Bridge has been constructed by British and recently, local government shut it for repairs. Within the week of its re-opening, this major accident has happened. 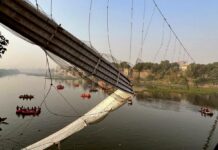