Telangana state has been looking forward to grow as an Industrial Hub, on the back of Hyderabad, which is ever-growing as a IT Hub. For this, Government has decided to introduce a master-plan to re-design and build towns, cities, accordingly. As per this idea, new Master-plan has been introduced in Kamareddy district and city has well. Farmers are unhappy with this master-plan. Kamareddy farmers have gone on a protest and decided to surround collectorate. Kamareddy collector decided to not take their demands notice and the protestors have decided to call for a Bandh.

Kamareddy collector on 5th January, asked one of the representatives of the farmers or few to come to the office and submit their demands notice. Farmers on the other hand, asked collector to come to their place and take the demand notice. Collector has denied this request and Kamareddy farmers have decided to go on Bandh and further protests. Even political party incharges have joined the protest and police have arrested few of them.

More and more farmer committee leaders are joining the protests and Kamareddy has become highly unstable with protests which can anytime go violent. For now, farmers and political incharges are being co-operative with police and the protests haven’t grown violent. Kamareddy collector is still strong on the word of not going to the protestors but want them to come to the office and submit the demands notice. 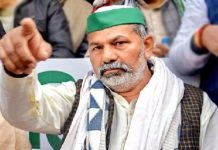