Etela Rajender has resigned to TRS party and won as MLA on his own due to differences with Telangana CM KCR and power distribution in party. Recently, Etela Rajender has been asked to apologize in Assembly by TRS MLAs and as he did not oblige, Speaker suspended him for creating ruckus. The BJP MLA has now given his full support to Munugode bypoll BJP candidate, Komatireddy Rajagopal. Etela Rajender alleged CM KCR of manipulating Munugode bypoll election during his press meet.

Etela Rajender asked voters of Munugode to take one lakh amount also if they are offered but teach a lesson to KCR by voting for their candidate Komatireddy Rajagopal. Etela Rajdender further stated that KCR is trying similar tricks that he tried at Huzurabad election to win against him. Komatireddy Rajagoal attacked KCR and KTR stating that they are doing land scam under Dharani portal.

Komatireddy Gopal accused KCR of taking illegal control of 18 lakhs crores worth of lands in Telangana state using Dharani portal. He further alleged that KCR took bribe to release 6 lakhs acres of land and more than 24 lakhs acres of land is under KCR and his family control.

Meanwhile, Revanth Reddy, Congress leader stated that Komatireddy Rajagopal quitting Congress and joining BJP is like son after getting married going to in-laws house. Revanth Reddy challenged KCR and TRS to attack them at Munugode, if he has no fear and not at their offices. He asked Munugode public to choose Congress over TRS and BJP. Etela Rajender reiterated that people should wake up and support BJP against TRS. 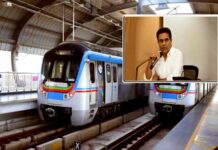 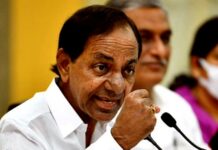 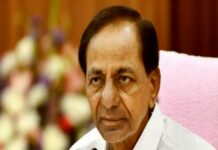