AP CM YS Jagan laid foundation stone for Aqua University at Narsapuram and talked at the meeting. YS Jagan claimed that Nara Chandra Babu Naidu is feared about his future in politics and YSRCP has been able to put that fear in him as well. He further stated that Pawan Kalyan is trying hard to reinstate TDP and BJP friendship for 2024 elections, as he does know that people are in majority support of YCP Government.

YS Jagan stated that Nara Chandra Babu Naidu has become desperate to find some or the other way to win at Kuppam constituency and has he knows that there are no chances for his win, he has resorted to drama and blackmail, saying that he will retire of this elections. “People should make sure that these are his final elections”, said YS Jagan. Further he classified Janasena as “Rowdysena” and said that Pawan Kalyan cannot win as people have got frustrated with NCBN government way back in 2019, only.

Nadendla Manohar reacted to YS Jagan comments and laid questions in front of him. He stated that Janasena chief Pawan Kalyan has been respectful even in his remarks against Government but YS Jagan has crossed all the limits. He asked why Pawan Kalyan and JSP needs to be classified as “RowdySena”. He stated that they have worked for people and mirrored Government failures. We can expect YS Jagan to soon answer for his questions, in his own style. 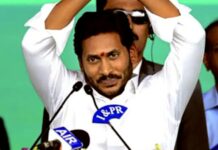