Suhas, who started his acting career with YouTube videos on Chai Bisket, is an amazing talent with a surprising choice of films. After a terrific performance in Colour Photo which also won a National award, he surprised everyone in Hit-2. And next, he will next be seen as a struggling writer in the upcoming hilarious fun family entertainer Writer Padmabhushan. The film’s theatrical release date has been announced.

Writer Padmabhushan is slated for a theatrical release on February 3rd. The release date poster presents Suhas as an aspiring youngster with big goals and dreams. He looks ecstatic with a charming smile on his face, he is seen standing and giving a pose on Prakasam Barrage.

In this film set in Vijayawada, Tina Shilparaj plays the female lead in this film. Debutant Shanmukha Prashanth has directed the movie which is produced by Chai Bisket Films, in association with Lahari Films. Anurag Reddy, Sharath Chandra and Chandru Manohar are the producers and G. Manoharan presents it.

Shekar Chandra and Kalyan Nayak scored the music and the film’s first single Kannullo Nee Roopame turned out to be a chartbuster and Venkat R Shakamuri handled the cinematography of the film.The makers are planning to release the trailer of the film soon.

Chiranjeevi and Ravi Teja to give us Poonkalu Loading on this date! 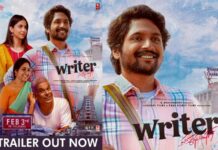 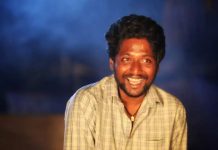 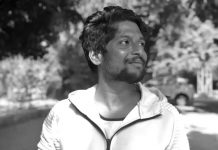 Suhas in a full-steam eccentric mode in ‘Family Drama trailer