Tunisha Sharma, an young TV actress of just 20 years age, committed suicide and hanged herself to death in her make-up room on 24th December, 2022. Many fellow actors have mourned for her death and she was popular for being a part in Ali Baba: Dastaan-E-Kabul, recently. She was part of hit series like Bharat Ka Veer Putra – Maharana Pratap, Chakravartin Ashoka Samrat, Internet Wala Love, Sher-e-Punjab: Maharaja Ranjit Singh. Tunisha Sharma committed suicide because of her break-up with co-star Sheezan Mohammad Khan, alleged her mother.

Tunisha Sharma mother in a video, emotionally stated, “Despite being involved with another woman, he continued a relationship with Tunisha. He used her for three-four months. I just want to say that Sheezan should be punished, he should not be spared. I have lost my child.” She filed a case against Sheezan Khan for abetment of suicide and Vasai Court has ordered for four-day custody. The actor has met Tunisha Sharma for a lunch, before she committed suicide, say reports.

Sheezan has told the police that he broke-up with Tunisha Sharma, 15 days ago, due to their religion differences and has he was disturbed by the aftermath comments post Shraddha Walker death case. He stated that he was disturbed about their relationship, keeping the 8 year age gap in mind, how people would perceive it. He said “Love Jihad” kind of terms have made him take this step. Sheezan also stated that Tunisha Sharma, earlier tried to commit suicide post brerak-up and he saved her. He asked her mother to take care of her yet this unfortunate incident as happened.

On the other hand, Tunisha Sharma mother has stated that Sheezan is lying and his “cheating” had forced her young daughter to take such an extreme step and he should be punished too. Well, now TV actors association is proposing to take counselling sessions for young TV actors in the Industry to handle issues and fame, as they don’t want such unfortunate incidents to repeat. 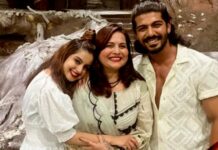