Director K Dasaradh is known for making classic family entertainers and his Santosham will remain to be one of the best family entertainers in Telugu. Dasaradh wrote the story for his maiden production venture titled as Love You Ram. DY Chowdary who is directing the movie is also producing it, alongside K Dasaradh under Mana Entertainments and Sri Chakra Films banners.

The first-look poster shows the sparkling chemistry of Rohit and Aparna. While Aparna looks gorgeous in traditional wear, Rohit looks handsome here. The theme music is very pleasant and so are the visuals in it.

Sudhakar Borra (Tennessee) and D Nageswar Rao are the co-producers of the movie for which the screenplay was penned by Kishore Gopu and Shiva Mokka. Praveen Varma wrote the dialogues.

The film’s shoot has been wrapped up and the post-production works are happening at present. 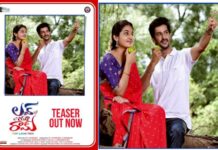