Tamannaah Bhatia has been known for her sarcastic sense of humor and she is not one to mince her words, when she wants to give someone a counter. The actress has decided to answer to the rumors about her marriage and would-be. Recently, rumors about Tamannaah getting married have been surfacing everywhere and Bollywood gossip portals have been running them aggressively too.

Tamannaah Bhatia in her Instagram story shared the following reel and introduced her “Husband” to world. In an answer to all the rumors, Tamannaah posted her own self playing a male character get-up in F3 Movie. Rumors have stated that her would-be is a businessman and Tamannaah laughed at it and stated that he is the businessman of the Year.

Well, some gossip sites should take a chill pill, when the actors maintain their silence. Poking them to get an answer or spreading lies should not be their only work. Tamannaah Bhatia has given a strong counter, we must say. She worked in Bubbli Bouncer, OTT movie of Madhur Bhandarkar, recently and has few more web-series, films coming up. We hope her privacy about personal life, will be respected by gossip sites but if they don’t, we hope Tamannaah will keep answering them strongly. 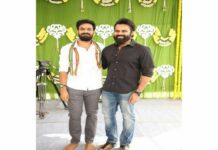 Vaishnav Tej to give Rabhasa director a chance?