Shriya Saran has been able to continue her career as an actress ever since her debut back in 2001. She starred alongside big stars like Nagarjuna Akkineni, Megastar Chiranjeevi, Nandamuri Balakrishna, Mahesh Babu, Daggubati Venkatesh, Pawan Kalyan, Jr. NTR, Prabhas, Ravi Teja in Telugu and Vijay, Superstar Rajinikanth in Tamil. Shriya Saran entered in Hindi Cinema but did not get opportunities to star in Big Star films earlier but Drishyam had her star opposite Ajay Devgn.

Shriya Saran shared screen with Ajay Devgn in RRR and Drishyam 2, recently. Both have become huge blockbusters and she is waiting for the release of Kabzaa, Kannada big budget film. The movie stars Upendra and Kiccha Sudeep as leads for the first time. Well, at the screening of Drishyam 2, Shriya Saran kissed her husband Andrei Koscheev and the PDA attracted many trolls, negative comments from social media.

The actress rebuked the trolls and stated that she doesn’t understand what mistake did they commit. She stated that at a very happy moment in her life, her husband wanted to kiss her and they shared a beautiful moment. Shriya Saran commented that trolls or negative comments should not enter into her personal space and PDA is their personal matter, which the couple have no issues with. Well, Shriya Saran and Russian Tennis Player, Andrei Koscheev got married in 2018. The couple have a kid. 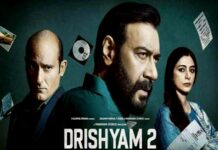 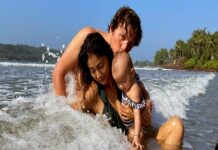 Shriya and her baby give major “Cute goals”