Sheezan Khan family, his mother and two sisters have come out in front of media. Falaq Naaz, an actress, shared an image of Tunisha Sharma wearing a scarf around her neck and said that Tunisha Sharma has never been forced by them to do anything. She also shared that they treated Tunisha as their younger sister and family member. Later, Sheezan Khan’s mother has alleged Vanitha Sharma and Pawan Sharma were abusive towards the young actress.

She further stated that Pawan was Tunisha Sharma manager and as he became aggressive with the youngster, she fired him. Shockingly, she shared that Vanitha Sharma has taken Pawan’s side many times forcing her daughter to attend work events that Tunisha Sharma did not wanted to. Well, both parties have made public allegations on another and which one is true and which is isn’t, has become hard to even determine. Tunisha Sharma suicide has opened a big Pandora box about her life and sadly, this has become a Great Indian Drama to follow for viewers! 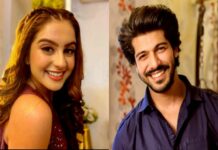 Was Tunisha Sharma forced to suicide due to her ex-boyfriend?