Shah Rukh Khan after a gap of 4 and half years, is coming up with this new film to theatres. He did act in cameo roles in Brahmastra, Rocketry but he did not do a full-fledged role in these 4 years. Now, his Pathaan is getting ready to hit the screens on a massive scale on 25th January, 2023. Shah Rukh Khan has a huge pull among masses but his previous three films – Zero, Jab Harry Met Sejal and Raees did not match up to the expectations on opening Day too. Now, the gap and genre of his latest film, Pathaan, seems to be attracting masses and his fans to rush to theatres. Shah Rukh Khan fans are ecstatic to just celebrate him on Big screen while masses want to watch a big star action flick.

We can say that the response has been huge and encouraging for Bollywood after abysmal 2021 and 2022. KGF Chapter 2, RRR and Brahmastra had good opening days in Hindi markets but only one of them is pure Hindi film. Now, Pathaan is set cross Brahmastra opening day numbers on a Non-Holiday opening day. Shah Rukh Khan film, Pathaan, has already sold 3,00,000 tickets at National Multiplex Chains for Opening day and it is expected to cross 4 Lakhs and touch War’s phenomenal numbers 4.05L. After Don 2, this can be categorized as complete action film from Shah Rukh Khan.

Raees, Chennai Express, Happy New Year had action episodes but they did not completely come out as action thrillers. Shah Rukh Khan gave a good performance in Raees but Pathaan promises to be pure Popcorn flick that Bollywood has been failing to produce, lately. Even the production house YRF is expecting to register a strong comeback with this Shah Rukh Khan film, after they have released huge disasters throughout the 2022.

Shah Rukh Khan has been their trump card over the years and the Overseas, Indian audiences response to the trailers and the two songs, massive ticket bookings shows that they have a winner at hand. Siddharth Anand delivered a huge action blockbuster with War and Pathaan, marks the beginning of YRF Spy Universe too. So, along with Shah Rukh Khan we can expect cameos by Salman Khan and Hrithik Roshan, too. 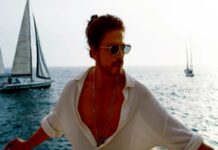 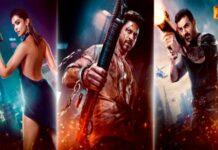