The combo of actor Naga Shaurya and director Srinivas Avasarala has given us two memorable films in the past, Oohalu Gusagusalade and Jyo Achyutananda. Both the films are best examples that they bring the best out of each other. The films have aged so beautifully over the years, enjoying great reception in theatres, television and OTT alike. With Phalana Abbayi Phalana Abbayi, they look set to score another hit with their hattrick project.

An attractive first look of the film was launched today. Both the leads Naga Shaurya and Malvika Nair are seen listening to music while donning formal winterwear and leaning onto one another over a journey. The aesthetic costumes, the cute on-screen pairing and the floral borders in the poster indicate a sweeping romance made on a large canvas. The eye-catchy poster instantly piques your curiosity.

A humourous announcement video of the first look was launched yesterday where the lead actors get together on a call with Srinivas Avasarala, discussing the absence of any updates surrounding the film. When Shaurya even says, ‘Even RRR has released in theatres’, Srinivas Avasarala cheekily responds to him that RRR had three letters while Phalana Abbayi Phalana Ammayi has four (when read as PAPA) before confirming the launch date (January 2).

Phalana Abbayi Phalana Ammayi is a romance spanning a decade revolving around the highs and lows in the relationship of a couple. The film takes the viewers through their journey as they age from 18 year-olds to 28 year-olds. The romance element in the film is expected to be very realistic, mature and sensible and the director has claimed he would be presenting love in seven different hues, akin to a rainbow. Srinivas Avasarala’s conversational dialogues are a major USP of the film, the makers say.

Kalyani Malik, who scored the music for Naga Shaurya-Srinivas Avasarala’s earlier collaborations, is the composer for Phalana Abbayi Phalana Ammayi as well. The shoot of the film was wrapped up recently and more details surrounding the film’s release will be out shortly.

Panja Vaishnav Tej next movie to release in April! 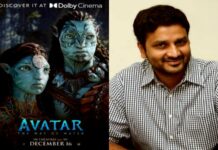 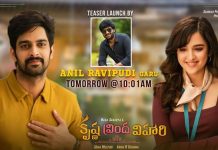 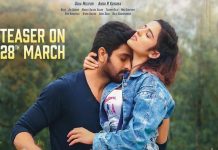