Megastar Chiranjeevi and Mass Maharaja Ravi Teja are coming together after two decades. In film, Annayya, both essayed the role of brothers and now in Mega154, they could be going against each other. On auspicious day like Diwali, Mega154 team has decided to unveil the title of the film and release a mass cracker of a teaser for all to whistle and enjoy. Chiranjeevi will be seen in a complete mass avatar like in his prime 90’s, once again in this film.

Megastar Chiranjeevi has decided to mix class and mass elements in right balance on screen post his comeback to support the change in his image as a politician as well. He has decided to never go back to politics and hence, he wants to deliver a huge mass commercial blockbuster which made him, what he is, today. Megastar Chiranjeevi fans are missing his full-length mass comedy avatar in films and director KS Ravindra aka Bobby, who made films like Power, Sardar Gabbar Singh, Jai Lava Kusa, Venky Mama, has promised to them that he is going to bring out the vintage Chiru back in his film and hence, the tagline “Poonakalu Loading…”

Mass Maharaja Ravi Teja after becoming a Big Star, is starring in a film alongside his favourite actor, Megastar Chiranjeevi. Fans are eagerly waiting to watch them together on screen, as sparks will fly without any doubt. Shruthi Haasan is playing the leading lady role in this movie. A small pre-teaser has been released by the team before the actual Dhamaka, which is by the way, next Ravi Teja solo film.

Team decided to release a small clip from Teaser before unloading the full mass Sparkle on 23rd October. This Pre-teaser has increased the anticipation for watching Megastar Chiranjeevi in his vintage style and in this new get-up. Team revealed only his back pose and fans are already trending it on social media with great excitement. The mass teaser will sparkle for Diwali on 24th October at 11:07 AM. The film’s release is planned for Sankranthi in 2023 and works are progressing as per the schedules.

Diwali begins with a MASS EXPLOSION 💥#Mega154 Title Teaser Tomorrow at 11.07 AM ❤️‍🔥

With a mass teaser, traditional sweets complete the Diwali experience. Here are some easy to make at home, Traditional Diwali sweets, read here. 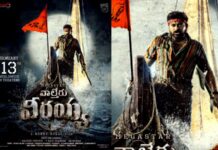 Get ready to welcome Waltair Veerayya on this date! 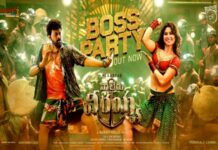