What is Poonakaalu Loading? If you want a clarity about this, just watch the fourth song from megastar Chiranjeevi and mass maharaja Ravi Teja’s highly-anticipated flick Waltair Veerayya directed by Bobby Kolli (KS Ravindra) under the banner of Mythri Movie Makers.

Poonakaalu Loading is the fourth song and true to the title, the song offers poonakaalu, to the class and the mass audience. Rockstar Devi Sri Prasad who is the best in the business in scoring mass numbers has conceptualized and rendered a song that makes anyone tap their foot. Roll Rida penned some funny lyrics, and also sang the song along with Ram Miriyala. Furthermore, Chiranjeevi and Ravi Teja also crooned the number to make it a much more distinctive one.

While Chiranjeevi looked massy, his get-up brings back the memories of his yesteryear blockbusters Mutha Mestri, Rowdy Alludu etc. Ravi Teja, on the other hand, looks trendy. We need to wait for another couple of weeks to see the mega mass magic on big screens.

The ambitious project of Bobby Kolli is being made lavishly on a big budget. Shruti Haasan will be seen as the leading lady opposite Chiranjeevi. The film is produced on a grand scale by Naveen Yerneni and Y Ravi Shankar of Mythri Movie Makers, while GK Mohan is the co-producer.

Arthur A Wilson cranks the camera, whereas Niranjan Devaramane is the editor and AS Prakash is the production designer. Sushmita Konidela is the costume designer. While the story and dialogue were written by Bobby himself, Kona Venkat and K Chakravarthy Reddy penned the screenplay. The writing department also includes Hari Mohana Krishna and Vineeth Potluri.

Waltair Veerayya will be hitting the screens grandly worldwide on January 13, 2023. 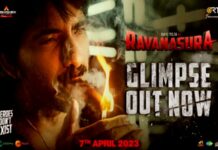 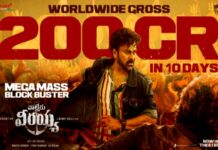 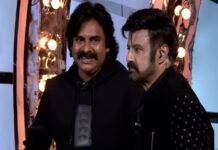