Malaika Arora turned whole Nation towards her as VJ and “Chaiyya Chaiyya” girl from SRK’s Dil Se. Paparazzi loves her as Malaika aces gym looks, airport looks and people love to watch her perfect curves in fashionable or regular clothes. Now, Malaika turned out to be the queen with the special song with Ayushmann Khurrana’s upcoming movie with Aanand L Rai.

It’s a special suprise for fans of Malaika Arora. The preview of the trailer of the film was held in Mumbai along with the dancing diva for this special song. The film’s producer Bhushan Kumar also mentioned at the media that the action hero has some good songs or he didn’t mention the songs in which Malaika is gonna dance. Malaika had appeared in the past songs like Munni Badnam Hui from Dabangg, Anarkali Disco hali from Housefull2 and Maahi Ve from Kaante. The  most famous song Chaiyya Chaiyya from Dil Se.

It is a happy news for all her fans to see her again with this special song hope that this too will be a blockbuster song for her career. 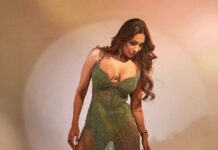 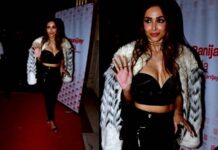