Keerthy Suresh has become a huge star with Mahanati. Post that film, she got huge recognition and market in South Indian languages. Keerthy Suresh became part of films like Annatthe, Sarkar, Saamy Square, Penguin, Sandakozhi 2, Miss India, Rang De, Good Luck Sakhi that did not work at the box office as much as anticipated or gain critical acclaim too. She made a comeback with Saani Kaayidham as an actress on OTT and with Sarkaru Vaari Paata, she took a complete glam route for the first time, in her career. Now, Keerthy Suresh is serious about transforming her screen image.

She shared new photos from her holiday at Koh Samui, Thiland. Keerthy Suresh captioned them, “Koh Samui and sunsets! Pure beauty”. For the first time, she shared images of her wearing a swimsuit and enjoying a meal in the beach swimming pool. Keerthy Suresh has glammed up our New Year with these images, we can say so.

The actress will be seen in movies like Dasara, Bholaa Shankar as sister of Megastar Chiranjeevi, Siren, Maamannan. Keerthy Suresh wants to be versatile on screen in glamour roles and also in acting based characters. We hope she will achieve all her goals in the New Year and entertain us even more.

Mohan Lal and Superstar Rajnikanth are coming together for first time ever in Jailer. 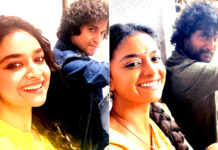 Nani and Keerthy Suresh wrap up their shoot for Dasara 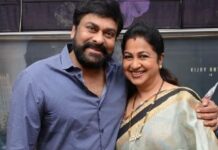