Kajol has been one of the most beautiful and talented actresses of Indian Cinema. She became a star after her performances in Baazigar, Karan Arjun, Dilwale Dulhania Le Jayenge got huge traction among audiences. Her pairing with Shah Rukh Khan became iconic as both of them appeared in Kuch Kuch Hota Hai, Kabhi Kushi Kabhi Gham, My Name is Khan and Dilwale. Kajol fell in love with Ajay Devgn and married him. She did not continue acting regularly in films after becoming a mother but she has been choosing different scripts, lately.

Recently, Kajol starred in Revathi directorial Salaam Venky as a mother who feels helpless unable to help her ailing son. The trailer has gone viral and you can watch it here. While on-screen she has gracefully aged to elder roles, off-screen she has been one of the well-dressed, graceful and beautiful women of Bollywood. You can watch her recent clicks in saree, if you don’t believe or agree with us.

After watching the photos below, you will definitely agree with us. Go on… there is no tax on watching beautiful pictures. By the way, even Nysa Devgan, daughter of Kajol is also taking on her mother in dressing, style and beauty. Watch her photos, here.

Protein snacks that will help you loose weight. Read here. 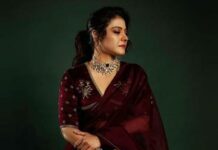