Janhvi Kapoor has been dropping glamour bombs on social media with her latest pictures. The young actress is looking to carry forward her late mother and great legendary beautiful actress, Sri Devi. Janhvi Kapoor has released her new pictures in white saree, she tied in Malayali style. In the pond, she looks like a Raj Kapoor heroine, who is walking out, from his one of the dreamy legendary frames. Janhvi Kapoor has been mixing her glamour quotient at varying amounts while being comfortable in western and homely Indian styles.

The young actress looks gorgeous in this white saree. Janhvi Kapoor reminds us off Kareena Kapoor from Asoka and Preity Zinta from Dil Se, as well. Still, she has her own style and glamour quotient to add to the image and we are glad, she did. The flowy way of handling pallu of the saree, Janhvi Kapoor, just looks simply huge gorgeous.

She released her film, Mili on OTT platforms and now, she is performing in Mr. and Mrs. Mahi. Janhvi Kapoor movie Bawaal is already completed and it might release during, Summer season. 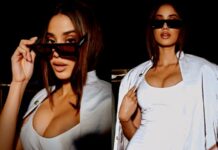 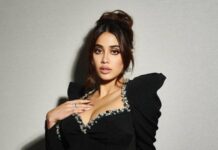