Black Panther has become one of the major cultural blockbusters that redefined Comic Books and gave Marvel Cinematic Universe, a new lease of life. Ryan Coogler brought in a new imaginative world to American Comic Superhero movies with African Comic Superhero. That helped MCU to bring in diversity. Unfortunately, Chadwick Boseman, the original Black Panther actor died due to Cancer and the franchise needed to move forward in new direction. Black Panther Wakanda Forever is first such comic book movie where lead actor died and franchise is forced to address such a complication. Ryan Coogler took it as a challenge and trailers promised another brilliant one from him. Now, let’s discuss about the film.

Talokan city underwater gets threatened due to other nations around the world searching for Vibranium. T’Challa (Chadwick Boseman) dies due to illness and Shuri ( Letita Wright) fails to recreate Heart shaped Herb in-time. Black Panther dies and Wakanda lacks any protector. On the other hand, Namor (Tenoch Huerta) finds out that someone from USA helped to build the machine that detected Vibranium. Namor and his army attacks the ships that came to drill out Vibranium and nations blame Wakanda. Namor threatens Wakanda rulers to join him or he would bring War to them. Shuri has to rise up to the challenge in the absence of Black Panther. Can she? Watch the movie to know more…

Black Panther comics had T’Challa has one of the greatest warriors to become BP and Shuri takes over from T’Challa, after his death. But her rise in comics to becoming Black Panther isn’t easy and elders deny fearing for her inner rage. She chooses to not fall into the traps of Power and they grant her the powers after test. Ryan Coogler added Namor to the mix and tried to spring up some similarities between them both almost making Black Panther Wakanda Forever, a love story with action episodes. As both protagonist and antagonist have to enter into a treaty that could benefit each other, the rivalry seems unnecessary or dragged out of bits. Uncanny friendship being forced by other surface nations onto this Vibranium rich underwater world and Wakanda nations, would have worked better, establishing rivalry between them for power or fear tactics.

Ryan Coogler again brought his A-game to the table as a director and his usage of score, songs has to be specially appreciated. Without falling into traps of over dramatising visuals using VFX like DC films, Ryan Coogler designed believable Underwater world, Talokan. Even VFX looks more grounded, real and production design is great. It is the writing that underwhelms after a brilliant start. Black Panther became such a rage among the world due to authenticity, it brought to the table in making, writing as well. Shuri and Namor being consumed by their egos, should have had even stronger sequences and establishment than one city tour. And a person who wishes friendship going ahead to commit crime, doesn’t really sit well. On the whole, while it is not as great as Black Panther, Wakanda Forever is nice addition to Marvel Cinematic Universe and better film from MCU, in recent years. 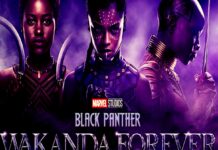