Aadi Saikumar came up with his fourth film, Crazy Fellow this year. Previously, Aadi Saikumar released Athithi Devo Bhava, Black, Tees Maar Khan this year and this film came out on 14th October, 2022. Digangana Suryavanshi, Hindi serial Veera fame, joined him in this film as lead actress. She debuted in Telugu with Hippi and acted in films like Valayam and Seetimaarr, before this one. Phani Krishna Siriki, who made Pakasala before, directed this romantic comedy. Aadi Saikumar joined hands with producer KK Radhamohan after Pyar Mein Padipoyane. Let’s discuss about the film.

Plot::
Abhi (Aadi Saikumar) doesn’t really have a goal in life. His sister-in-law (Vinodhini Vaidyanathan) pampers him to a level that he seems to be a spoilt-brat to his elder brother (Anish Kuruvilla). Abhi doesn’t think before he speaks and this attribute puts him in trouble every time. Still, he doesn’t change and his brother finds a job for him in his friend’s IT company. There one day he fights with his colleague, Madhumati (Digangana Suryavanshi). On a social media app, he befriends a girl and without meeting, they both express love towards each other. Who is she? Will Abhi find his love and win? Watch the movie to know more…

Aadi Saikumar is trying his best to serve films with different genres but he is not concentrating on script work as much as he should. One feels so, because as a performer he is concentrating on his role and trying his best to give an apt performance but a good script is an urgent need of the hour for him. A script that can serve his potential and seems worth of his time might give him the long awaited box office hit. In this movie, he tried to sell his performance and he has been best among all the lead cast. Digangana Suryavanshi and Mirnaa Menon did not get author backed roles and their performances haven’t been that great to talk about. Saptagiri, Narra Srinivas, Anish Kuruvilla, Vinodhini Vaidyanathan, Ravi Prakash have been wasted.

Writer and Director Phani Krishna Siriki tried hard to induce “comedy” in every scene and that did not let us take the characters seriously. The love story and romantic scenes are too predictable to keep audience engaged. Film plot seems to mix ANR’s Dasara Bullodu with Gulabi and Nenu Premisthunnanu movies. Still it tries too hard to sell the comedy scenes and they get louder with each scene. Even those scenes that we need to concentrate on character development appear too artificial and superficial. Better writing and freshness would have helped the movie to become engaging and entertaining fare.

Bottom-line: Too Crazy… Too Loud! 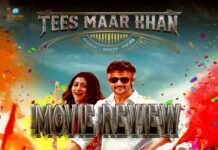